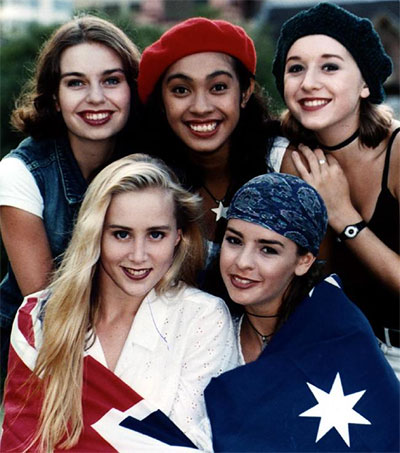 Robyn Loau Reunites With Her Girlfriends

Nineties Australian girl band Girlfriend, whose frontwoman was New Zealander Robyn Loau (pictured centre top), are reforming to mark the 25th anniversary of their No 1 hit Take it From Me.

The band, which was marketed to a teen and pre-teen audience, released two albums, cracked the UK and Japanese market and even released a clothing line.

“[The reunion has] been tricky to organise because we all live in different parts of the country,” Loau said. “It’d been at least 10 years since I’ve sat down with them all face-to-face. But it was a gorgeous reunion. Everybody’s great. Most of them are mothers and married, they’ve ventured into other directions. Siobhánn [Heidenreich] is a successful interior designer, Jacqui [Cowell] is a drama teacher, Mel has a successful video production company and Lorinda [Noble] has her hands full with two very young kids.”

Girlfriend paved the way for the Spice Girls, who released their first single, Wannabe, in 1996 – the year Girlfriend split.

They scored six Top 40 hits — Take it From Me, Girl’s Life, Bad Attitude, Without You, Heartbeat and Sooner or Later.

“I feel as though we were pioneers, even if we were unaware of it at the time,” Loau said.

Loau launched her solo career in 1997 with the single Sick With Love. She is now one of Australia’s most in-demand backing vocalists, performing with the likes of Martika, Eurogliders, Real Life and Berlin on retro tours.

Girlfriend has plans to perform later this year, with details being finalised. Meanwhile, Loau has taken on her first pantomime role – she’ll play Tiger Lily in Peter Pan and Tinker Bell.

Tags: Bad Attitude  Girlfriend  Girl’s Life  Heartbeat  News.com.au  Robyn Loau  Sooner or Later  Take it From Me  Without You