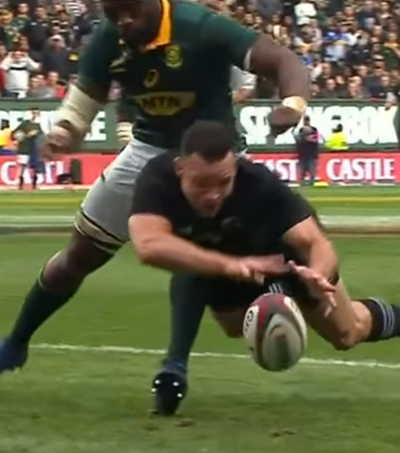 The New Zealand “All Blacks completed a clean sweep of the Rugby Championship while the Springboks restored pride in their jersey in one of the great Test matches in front of 50,000 fans at Newlands,” writes Sam Worthington in an article published on News.com.au. It was “New Zealand’s sixth straight victory in the tournament” and “was a completely different contest to South Africa’s previous 57-0 capitulation at North Harbour.”

Even though “New Zealand had already sealed the Rugby Championship”, coach Steve Hansen named their strongest possible line-up and his decision “was well and truly vindicated as South Africa threw absolutely everything at the world champions,” according to the article.

“Both teams threw everything into that Test match and what a place to play, at Newlands,” said All Blacks captain Kieran Reid. “A great Test match, one of those ones you remember.”

“The old rivals scored three tries apiece in a brutal yet breathtaking Test, proving there is no such thing as a dead rubber between the two proud rugby nations.”

After an “extraordinary first half which went for 50 minutes and featured terrific defensive attitude from both sides,” the All Blacks led 8-3.

“Boks halfback Ross Cronje was first to strike in the second term” “before Kiwi winger Rieko Ioane pounced on a South African error to scorch away in the 60th minute and restore the visitors’ lead,” writes Worthington.

“It was a great Test match and it was great to see South Africa not disappoint us. And they never do when we come over here, they always front up and give us a heck of a game,” said All Blacks coach Steve Hansen.

“Our guys are going to walk away with more learning and people back home should be extremely proud of them because they showed a lot of character tonight.”

Malcolm Marx — “who had one of the all-time great Test matches and was a terror at the breakdown — gave the hosts a glimmer of hope when he barged over in the 79th minute but, as they have done so often, the All Blacks held their nerve under pressure and hung on,” writes Worthington.

“We played against the best team in the world and we’ve made unbelievable strides (…) Coming from 57-0 two weeks ago, to lose by one point and draw against Australia, it shows the character of the side and the players,” said Springboks coach Allister Coetzee.