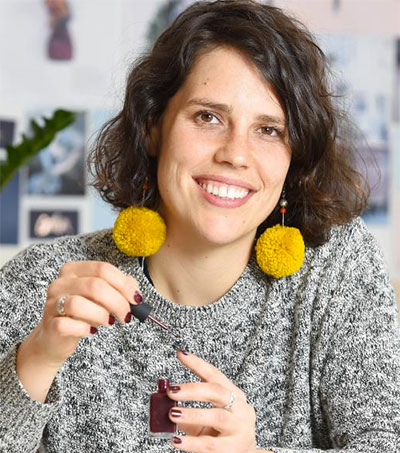 She doesn’t have a multimillion-dollar laboratory or a celebrity endorsement deal. But New Zealand-born Melbourne-based Anna Ross is a bona fide cosmetics queen, with her Kester Black nail polish selling around the world – and it all started in her bedroom in 2014. Dana McCauley reports for news.com.au.

Ross, who last year was named Telstra Young Businesswoman of the Year, launched the venture with a simple Gumtree ad, seeking a chemist to help her develop what she originally intended as an add-on product to offer alongside her jewellery line.

The colour-savvy designer, who previously had her own fashion label, knew exactly what she wanted: a polish free from a long list of nasty chemicals.

Ross spent a year developing an initial range of six colours, then quickly discovered that nail polish was a fair deal more lucrative than silver jewellery, which had been hit by a glut of cheap imports from Bali.

“We tripled our turnover in three months, so I knew we were onto a winner,” Ross told news.com.au.

Now Kester Black has a team of seven staff working from its head office in Collingwood and remotely, with distributors all over the world.

Its wares are sold in Italy, Switzerland, Austria, Germany, the Netherlands and Belgium, with the United Kingdom next on the horizon.

Kester Black is in the process of drumming up investors to bankroll a $30 million, five-year plan to pursue an aggressive growth strategy.

ELLE Germany featured the polish on its Insta-Hype page, testing the “It-label” for its readers, the reviewer’s favourite colour, Barbie, “a pink like no other.”