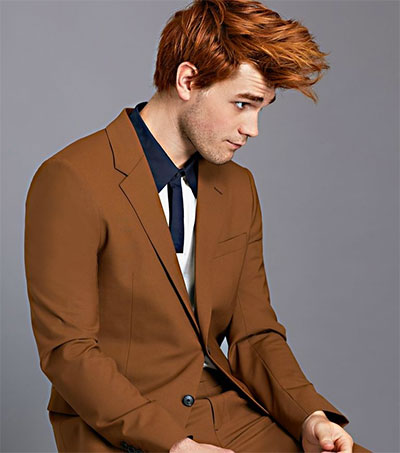 Riverdale’s KJ Apa Dresses Up and Down

“KJ Apa is the comic book hero next door. (But you already knew that.) As Archie in the surprise-hit series Riverdale, the New Zealand-born actor manages to strike a balance between the wholesome source material of the long-running comic series – he plays music. He’s a nice jock – with the darkness that lies at the heart of his town,” Jonathan Evans writes for Esquire.

“Why are we telling you this? Because it’s a perhaps-overly verbose way of explaining why, when Apa made his way to Esquire HQ for a photoshoot, we wanted to capture the way that same balancing act is reflected in some of fall 2017’s best clothing. No longer is style forced to be one thing at the expense of the other. Want to dress up? Great. But maybe dress down a little at the same time. Here’s how to do it.”

Auckland-born Apa, 20, played Kane Jenkins in prime-time soap Shortland Street. In 2016, he was cast as Archie Andrews in Riverdale.