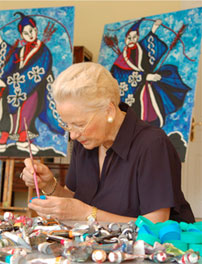 Former Matangi, Waikato resident and mother of two of New Zealand’s richest men, Ana Tzarev, is exhibiting her riotously colourful large-scale canvases at London’s Saatchi Gallery in conjunction with the Chelsea Flower Show. Ana Tzarev was born in Croatia and emigrated to New Zealand in 1955 at the age of 19 when she married beekeeper and farmer Robert Chandler. She found the rural New Zealand experience somewhat of a culture shock, having grown up in the inspiring presence of Renaissance art and the heritage of centuries of deeply rooted culture. As an outlet for her creativity and what transpired to be an innate commercial sense, the family opened Hamilton’s first and only upscale home store Chandler House in 1972, eventually expanding to 10 stores throughout the North Island. The sons Richard and Christopher Chandler both graduated from Auckland University in commerce and law and then ran the family business. They sold the department stores and the $10M in proceeds formed the seed capital for global fortunes valued at $4B (Singapore-based Richard) and $1.5B (Dubai-based Christopher). Both brothers are philanthropists with their own foundations. The brothers were early investors in emerging markets – telecommunications in Brazil, real estate in Hong Kong, oil refining in South Korea, electricity in Russia, beverages in India, Japanese banks. The flagship Ana Tzarev Gallery on East 57th St in New York is, at 14,000 square feet, one of the largest private art galleries in the city. The London show is sponsored by JP Morgan.
(24 May 2012)