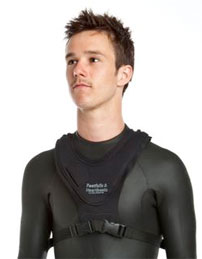 The James Dyson Award has nominated 22-year-old Victoria University graduate James McNab as one of 15 finalists in its 2012 design competition. After the death of McNab’s friend Jacob Beck-Jaffurs, who suffered a shallow water blackout and drowned while spearfishing in 2011, McNab set about designing an auto-inflating vest for freedivers to honour him. McNab, who studied industrial design, invented the prototype Revival Vest as a way for a freediver, or any other ocean athlete, who blacks out to be automatically brought to the surface. McNab said  the opportunities were endless. “Fishing, kitesurfing – it could be used for so many water sports.” The winner will be announced on November 8.