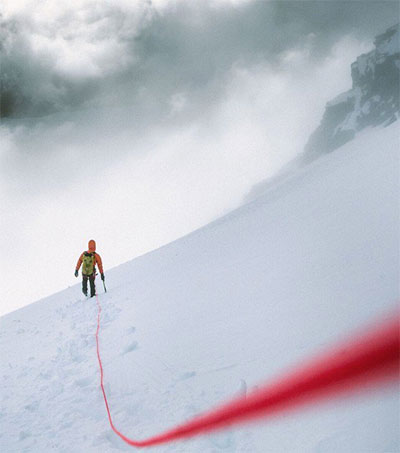 Three American climbers joined New Zealand alpinist Graham Zimmerman, 29, for a 72-hour descent of Mount Aspiring in which the group navigate “across glaciers and snowfields, jungles and flooded rivers; exchange greetings with local sheep and shepherds; and eventually arrive in the cascading heart of Fiordland, Milford Sound. The trek is documented in a photo essay for Outside Magazine.

“One phone call with Zimmerman led to many more, and, in March 2015, we set off for New Zealand’s South Island,” Forest Woodward writes for the magazine.

“Our objectives were simple: climb some mountains, eat some meat pies, explore. Months of planning boiled down to a few days of packing and preparation, a string of red-eye flights, and our groggy arrival in Christchurch. From there, we made fast tracks for the Southern Alps, fingers crossed for good weather that never came, with our sights set on the southwest ridge of Mount Aspiring (3033m).

“Helicopter pilots declined to fly us to the base of our objective, so we opted for the long slog by foot, some [48km] up the Matukituki Valley. We eventually summited via the southwest ridge. While the climb itself required some heavy trudging, what stood out in hindsight was the array of environments and ecosystems we passed through during our descent from Mount Aspiring.”

Zimmerman, who lives in the United States, was a finalist at the Piolet d’Or mountaineering awards in 2014.

He works as a project manager and surveyor with MWH Geo-Surveys.

Original article by Forest Woodward, Outside Magazine, May 20, 2016.