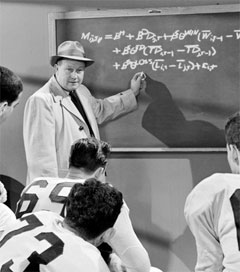 Economist at Massachusetts Institute of Technology, New Zealander Niven Winchester, who studies sports rankings as a hobby, argues that The National Football League (NFL) should rank teams more the way rugby does. Winchester calculates team standings would be more accurate if the NFL gave bonuses for scoring three or more touchdowns in a game and for losing by seven or fewer points. He says his system would do a better job of ranking teams in the standings, based on their ability, and would keep fans interested in games whose outcome is clear but that still offer opportunities for bonus points. It would also result in fewer ties in the standings. “Bonuses have little impact on teams that are clearly dominant but are significant when separating teams that are tightly bunched,” Winchester says.