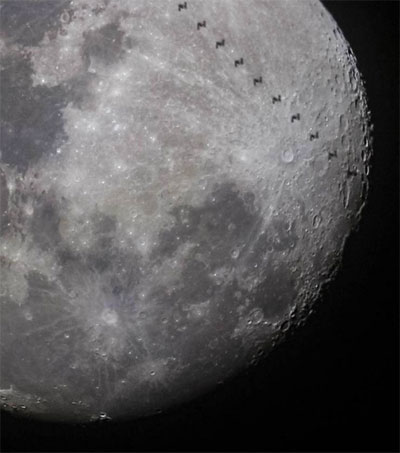 Auckland amateur astrophotographer Josh Kirkley captured a shot so unusual the cameraman can be heard gasping as he films clip. Kirkley describes his “shock” at capturing footage of the International Space Station (ISS) crossing in front of the moon.

In the “extremely rare” clip, the ISS can be seen flying at great speed across the path of the moon.

Kirkley, who has practised astrophotography for four years, set up a telescope and camera in his driveway after receiving a push notification that the ISS would be passing over Auckland.

“I am so blown away that I was lucky enough to capture this extremely rare event on camera. This doesn’t happen often. I think I may be the first person in New Zealand to capture this lunar transit. I have notifications set up on my phone to tell me when a pass of the ISS occurs in Auckland, and this one just happened to line up with the Moon. The actual transit happened so fast, literally over in the blink of an eye. I’m so grateful to be able to capture this, it’s been something I’ve wanted achieve since I started astronomy 4 years ago. Literally a once in a lifetime shot.”

“My phone had told me that the station should cross the path of the Moon but I thought it was maybe just an error, knowing how rare it was for both to perfectly align,” Kirkley told The Independent.

“I kept an eye on my camera screen for the transit, and after about 10 seconds I saw the tiny black silhouette of the ISS whizz across the lunar surface,” he continued. “It was too small to be see with the naked eye and only would have been visible on my camera screen.”