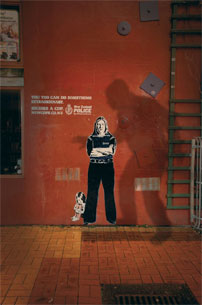 “The New Zealand Police are hipper than you might think” with a new nationwide ad campaign that aims to tell true life stories of police officers through stencilled street art by Otis Frizzell. In a style reminiscent of London street artist Banksy, the ads are painted on the walls in the same locations that the featured police activities took place. New Zealand Police hired M&C Saatchi to organize the campaign. From the cop who comforted Japanese victims of the Christchurch earthquake to the pair of officers demonstrating a classic catch-a-crook method, the three murals seriously muddle the old paradigm that police are the enemies of street artists. On Wellington’s Cuba Street Detective Kylie Schaare stands protectively over a small child. At night, a menacing shadow hovers over the scene. Detective Schaare arrested a man who had been abusing his own kids and numerous others.