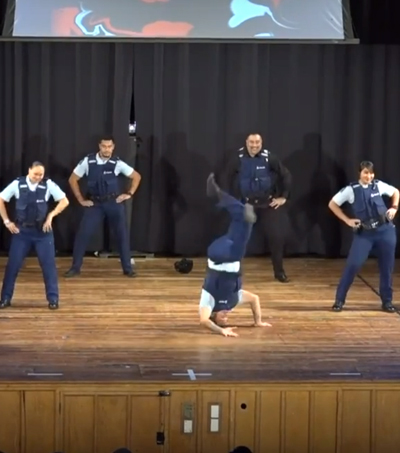 A group of New Zealand police officers have stunned a crowd by busting out an impressive hip hop dance routine in a surprise appearance at the Hip Hop Unite New Zealand championships on Saturday, writes Sinead Maclaughlin for The Daily Mail.

The ‘Hip Hop Cops’’ video that was posted on their Facebook account has gone viral since then.

“It was really fun to have them here, even the judges got into it holding up buts of paper with scores,” said Gemma Laing, Hip Hop Unite NZ event co-ordinator.

“We kept it a secret so it would be a surprise for the audience.”

The dancing police officers were accompanied by tracks such as Jump on It! by the Sugarhill gang and Justin Timberlake’s ‘Can’t Stop the Feeling’ and showed “off a range of skilful dance moves”, as reported in The Daily Mail.

Earlier this year, the New Zealand Police released the Running Man Challenge, which challenged other police departments around the world to a ‘dance-off’.