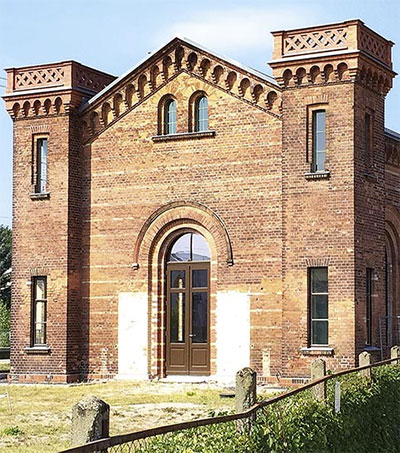 Macky, who lives six months of the year in Germany, says he stumbled upon the building on a weekend bicycle ride to Halbe, about 50km south of Berlin.

“Although seriously neglected, the building still looked impressive,” Macky says. “The most obvious evidence of decay were the trees growing out of the four-storey ornamental towers which stood at each corner. There was rampant vegetation growing up against, and damaging, the intricate exterior brickwork, broken windows, shutters and graffiti.”

But Macky says the failing structure, built in 1865, held a fascination and magnetism.

The building is Germany’s very first Kaiserbahnhof. It was built for Kaiser Wilhelm I of the Hohenzollern family.

The design was by 19th-century architect August Orth, and the builder for the project was Henry Strousberg, the “railway king of his day”.

Macky, who co-owns Easy Cycling Tours in Berlin, says the kaisers and their families used the private facilities at the station to refresh on their way to their hunting lodge – there were separate entrances and rooms for the kaiser and his ministers and attendants.

“They probably only spent 15 minutes in the building before heading off, but there was always a dinner there on the way home, after they had gone on a massive hunting spree that decimated all the wildlife, probably for several years. There are figures of 560 animals being killed in a single stay at the lodge.”

And of course, the trains still run past the door – the station is on the Berlin-Dresden line. But today, the cycle pathways are the preferred means of transport for many visitors.

Macky has always had a fascination with architectural history. His books include a history of Coolangatta – the grand Remuera mansion demolished without warning in 2006.