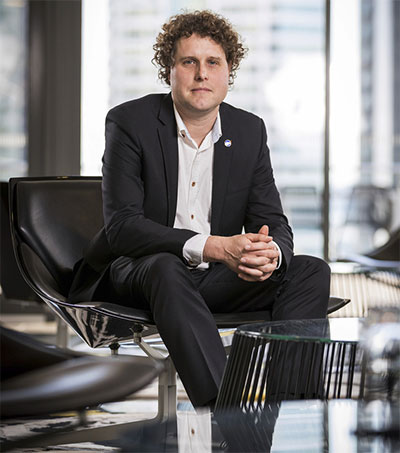 Beck explains his decision to Ian Tucker of The Observer.

“Were you taken aback about the reaction your Humanity Star geodesic sphere satellite project got from some scientists?” Tucker asks.

“The Humanity Star project is something I’d been wanting to do for many, many years,” Beck responds. “The whole point of Humanity Star was to try and get people outside and to look up and to realise we are one little planet in a giant universe. Once you understand that, you have a different perspective on the planet and a different perspective on the things that are important to us.

“Clearly, when you do something like this, it is going to miss the mark for some people. But the way I’ve designed Humanity Star and the orbit that I’ve put it in, the duration of its life – it’s all been carefully designed. The Humanity Star is only visible on the horizon at dawn and dusk and there’s very little astronomy done at those times.”

“[There’s] a lot of launches and satellites – will you be adding to the space junk problem?” Tucker asks.

“This is a key part of the way we deploy things to orbit. Small satellites are a good way to build space infrastructure, because you can do it very sustainably. A geosynchronous satellite will be around for tens of thousands of years; a small satellite will decay orbit and re-enter the Earth’s atmosphere and burn up. That kind of sustainability flows back into how we have designed the vehicle and how we insert satellites into orbit.

“Our craft go into a transfer orbit, which is highly elliptical. Then we split off the kick-stage, which is a tiny spacecraft of its own, then circularise the orbit. Traditionally, you would end up with a giant second stage in orbit and that doesn’t make environmental sense. So by going into the elliptical orbit it means that the second stage is dipping into the Earth’s atmosphere and it only stays up there for a very short period of time before it burns up. We only leave a small kick-stage up there, but that has its own propulsion system, so once we deploy the satellite we spin that kick-stage around and do a de-orbit burn. So we are very conscious of not leaving anything behind except the spacecraft. Historically, that’s not been done.”

“You’re sticking with satellites; you’re not interested in space tourism or other areas?”

“I’m always asked: ‘When are you building a bigger rocket?’ And the answer is always: ‘Never,’” Beck says. “I think we’ve got the size right. In 2016, we could have launched 62 per cent all of the satellites that were launched and if I doubled the size of the vehicle I could launch 64 per cent – so we are in the sweet spot. The biggest impact we can have for humanity is to enable the building of space infrastructure at a rapid and affordable rate. That’s going to have huge impact.”