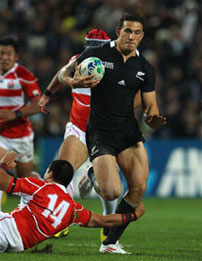 All Blacks coach Graham Henry has given his team a pass mark following their 83-7 thrashing of Japan in the Rugby World Cup Pool A match on 16 September. Henry said the All Blacks were better than their effort in the opening match against Tonga, which they won 41-10, and had a much better structure to launch their attack. “I think we improved considerably, which was pleasing,” Henry said. “We didn’t try to push the game too much. We just want to get better each game.” It was a dominant performance from the All Blacks, who had racked up a four-try bonus point inside 29 minutes. New Zealand next play France at Eden Park on 24 September.