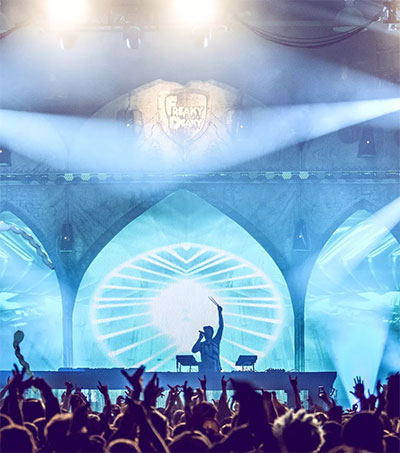 After last year’s Red Rocks performance before Emancipator, where it was hard to find a person not grooving to The Opiuo Band’s glitch hop tunes, it’s no wonder the amphitheatre wanted to see what Davey-Wraight could do with a night dedicated to his innovative beats, Cori Anderson reports for Denver online lifestyle publication, 303 Magazine.

Long-time fans and newcomers to the syrupy-bass of Opiuo can rejoice doubly with this headlining show, as the announcement of an exclusive live performance with a 20-piece orchestral set, the Syzygy Orchestra, comes to light.

Using the instrumental expertise of DeVotchKa member Tom Hagerman to reimagine and reinvent old Opiuo songs, Syzygy Orchestra isn’t just about putting string instruments under the characteristically swampy bass beats. These compositions will be a whole new beast and Denver will be the first in the world to experience them.

“It might sound cliché but I honestly feel blessed and fortunate to be able to even do something like this and to do it somewhere like Red Rocks. It’ll be the highlight of everything I’ve ever done,” Davey-Wraight said.

Denver fans are no stranger to Opiuo’s hypnotic performances. He played his first show in the United States at Cervantes’ in 2010 and since has graced the stage at many local venues, as well as festivals like Sonic Bloom. This upcoming show will be his fourth time at Red Rocks and if we were to guess, it will surpass that peak in Opiuo’s existence from last year.

“Colorado is where, without a doubt, the strongest fan base for music like mine and even just my music is in the world. I don’t know what it is in the water there, but people just support the music. They are passionate about it. They love it. There’s nowhere else in the world like it, on that level.”