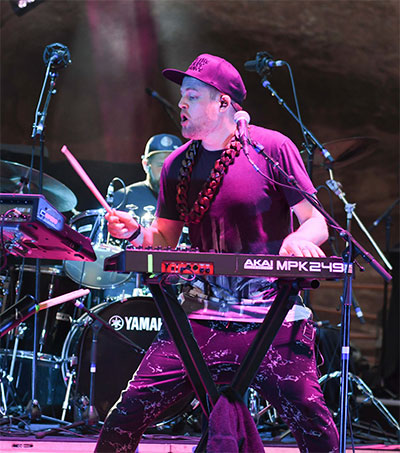 According to Denver-based online lifestyle site 303 Magazine, the group’s formation “was a bit more dramatic than the previous,” with Opiuo “front and centre along with his drum machine and keyboards.

“The sky was grey, which matched the smokey air as Opiuo dropped the first of his heavy beats. Usually a dubstep golden-boy, playing with The Opiuo Band offers a much different experience to Opiuo’s sound, especially due to the sultry vocalist. The vibe of the audience shifted from swaying along politely to stomping the ground and flailing arms perforating the wild light show.

“‘Who likes to shut the fuck up and dance?’ asked Davey-Wraight, in reference to one of his most popular tracks before it busted out into the airwaves.

“Shut the Fuck up and Dance not only received roars from the crowd and instant reactions from the bodies in the amphitheatre, but was the theme of easily the most common piece of merchandise in the building. Hundreds of tees that had the simple yet bold title of enforcement could be seen all over the packed house.

“As the set felt it might be coming to a close, Davey-Wraight announced that instead of going backstage and returning for an encore, the band would consider just playing through if the crowd made enough noise. The challenge was accepted, and the band pushed on for a few more tracks, introduced the full band and then Davey-Wraight threw his drum sticks into the crowd, impressively reaching row 21.”

Davey-Wraight, who is based in Melbourne, was born in 1984. He is originally from Motueka.