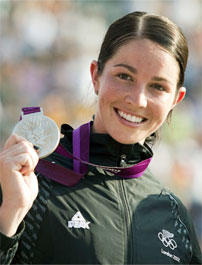 BMX rider Sarah Walker, 24, has won an Olympic silver medal for New Zealand. Walker, who is from Kawerau, finished fourth over the three-race semi-final to win her place in the final. She barely had time to gather her wits before the final began but she was on form and New Zealand spectators gave her a big cheer as she crossed the finish line in second place to take silver. Walker crashed three months ago in Norway and dislocated her shoulder, which left her thinking her Olympic dream was over. On the podium, Walker was in tears. “I’m happy. They’re tears of emotion and a little bit of disbelief as well. It’s been a lot of hard work to get to this point,” she said.