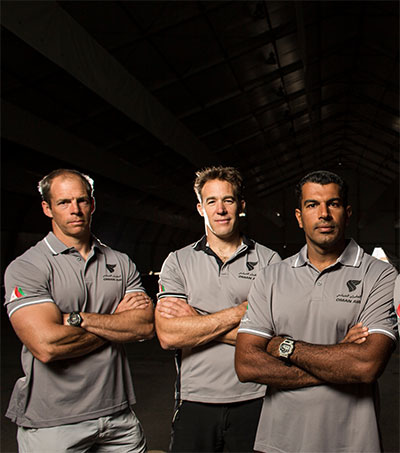 New Zealander Ed Smyth (pictured centre) and Australian James Wierzbowski from the Extreme Sailing Series team Oman Air were in Cardiff recently on a leg of the regatta where they took time to talk to TNT Magazine.

“I was born in Melbourne and grew up in New Zealand but I call myself a New Zealander,” Smyth, the team’s headsail trimmer, begins, before explaining what the Extreme Sailing Series is all about.

“I’ll use the cliché: it’s Formula One on the water I guess, so Formula One racing but with sail boats so it’s crash and burn, high intensity and a great spectacle for people to come and watch,” he says.

“My background as a sailor was fundamentally Skiff sailing as a junior and Olympic class sailing. Then I went into the America’s Cup, which when I did it was in a monohull boat. When they changed to the multihull boats I had to re-skill and I had the opportunity to join the Oman Sail group with The Wave, Muscat in 2012 and that opportunity was through Peter Greenhalgh, our mainsheet trimmer, who I knew personally and raced against when I was doing the Olympics sailing, so that’s how I got to where I am today.”

Oman Air is currently leading the standings this season.