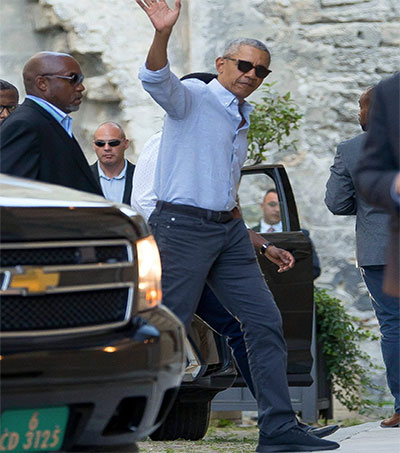 Obama Gets His Allbirds On

They say you can judge a man by his shoes, according to The Telegraph’s Tamara Abraham, so when Barack Obama stepped out in the south of France in June, a handful of eagle-eyed fans were quick to clock his trainers, a pair of £95 black Wool Runners from Allbirds.

So what is the allure of this unassuming shoe? Abraham asks. It’s not because Allbirds are especially stylish – the understated styles take simplicity to a new level – nor is it because they’re limited edition or designer-label expensive. In fact, the popularity of the wool trainers has a lot more to do with what they represent.

Unlike Hermès handbags and Gucci loafers, today’s status symbols are more about demonstrating your commitment to the environment or your political leanings than wealth or fashion, and protecting the planet is at the heart of Allbirds’ business model.

“Allbirds have a universal appeal, but are essentially for those that are conscious about design, comfort and sustainability,” Allbirds’ managing director for Europe Sandeep Verma tells The Telegraph. “Our shoes are understated and designed with the style and environmentally conscious consumer in mind.”

Since Obama stepped out in his Allbirds, the company says they’ve seen an increase in online searches for the Wool Runner.

“Our fans and customers know that the Allbirds ethos has always been to create better things in a better way,” Verma says. “Owning a pair of Allbirds is to share this vision and to be part of this collective goal. The Wool Runner has been purposefully designed without an obvious logo and this simplicity has played a big part in its success, as well as its status as the footwear of choice for those who are looking to tread more lightly on the Earth.”