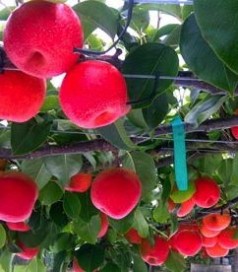 ‘Like an Asian pear with flavour’, the Papple is a NZ bred and grown cross of various Asian pears. The Papple has just made its Californian debut at Gelson’s markets, one of America’s premiere supermarket chains. David Karp, a food writer for the Los Angeles Times, says it is a ‘novel variety with the crunch, juiciness and sweetness of an Asian pear and the red-blushed skin and round shape of an apple.’ To get the lowdown on the Papple, Karp spoke to Allan White, a scientist with New Zealand’s Plant and Food Research. White bred the variety, technically named PremP109, in 1996, he told the Los Angeles Times. Karp writes that the Papple ‘derives its gorgeous red-orange skin color, very rare in Asian pears, as well as long storability, from Huobali, a coarse-fleshed Chinese variety from Yunnan, and juicy, finer texture from Kosui, a standard Japanese-type Asian pear. Growers in Motueka, New Zealand planted about 12 acres and first exported the fruit last year to England, where the fancy retailer Marks & Spencer bestowed the name ‘Papple’,’ Kay says. ‘Preview samples were superb, looking and tasting like no other fruit,’ Karp told readers. D.J. Olsen, formerly the chef at Lou Wine Bar in Hollywood, told the Times that the Papple was ‘super-juicy, with excellent crunchy texture.’ Karp salutes the hard work that New Zealand scientists put in to developing the Papple. ‘It has taken three generations of crosses over several decades for the New Zealand breeders to come up with promising new varieties with just the right mix of fruit qualities — Bartlett flavor and Asian pear crunch — along with the productivity, long storage and shelf life, and attractive appearance necessary for commercialization’. New Zealand Plant and Food have also developed crosses with the rich flavor of European pears Asian pears. ‘These varieties are likely to revolutionize the pear industry when they are marketed in a few years’, according to Kaye.