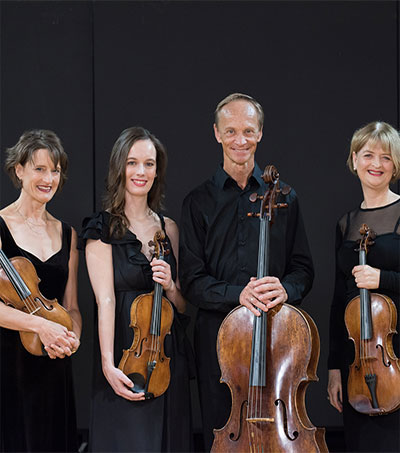 If you were to listen to the New Zealand String Quartet (NZSQ) with your eyes closed, could you tell that they were from halfway around the world? The Hamilton Spectator classical music writer Leonard Turnevicius asks.

“I think that you could tell that you couldn’t place us,” answered Rolf Gjelsten, the NZSQ’s cellist over the phone from his hotel room in Baltimore recently. “Because we’re in a kind of isolation in New Zealand, I think we take on influences just from all over. And we have so many different backgrounds in our quartet that I really think we have our own way of playing.”

“We’re not looking over our shoulder at what other quartets are doing and trying to find a gimmick,” Gjelsten said. “We’re open to finding our way into our interpretations with our own individual strivings and temperaments and sense of style. And I think being the quartet of a country and feeling like cultural ambassadors, there are so many ways that we learn to communicate through our music to really feel we’re a vital part of the culture.”

Not surprisingly, their recent Chamber Music Hamilton programme included two works by New Zealand composers. Gareth Farr’s “Te Tai-O-Rehua,” which translates from Maori as “The Tasman Sea,” was composed in 2013 to celebrate the 21st anniversary of the sister-city relationship between Wellington and Sydney. The 13-minute work is a musical sketch of the Tasman Sea, with, as Gjelsten said, “all of its tempestuousness.”

Though Jack Body composed his “Three Transcriptions for String Quartet” at the request of the Kronos String Quartet back in 1987, the same year the NZSQ was established, the NZSQ has taken that piece under their wings and toured it around the world. The work juxtaposes musical influences from around the globe, be it a Chinese jaw harp in the first movement, or an 18-string valiha from Madagascar in the second movement, or a Bulgarian village band in the third movement.

The NZSQ next performs on 30 November in Hobart.