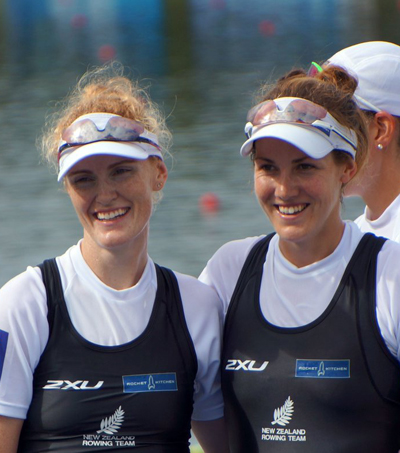 “Kerri Gowler and Grace Prendergast won New Zealand’s first gold of the Championships,” as reported by Newshub. “It’s been a long week of nerves, so we’re really pleased to have got this today,” said Gowler.

“Double sculling combinations Brooke Donoghue and Olivia Loe, and Chris Harris and John Storey delivered back-to-back golds on the final day of the world rowing championships in Florida today,” as reported in The New Zealand Herald.

“Donoghue and Loe, a new combination this year, delivered in hugely impressive style winning in 6min 45.08, with the United States 1.49s back in second and Australia third”, as reported in the article.

”We were pretty nervous but we just wanted to go out aggressively and make sure we didn’t let anybody get too much of an edge,” said Loe, daughter of former All Black Richard Loe.

“Harris and Storey, veterans of the elite squad, won their title in thrilling fashion. They were fourth at 500m, third at halfway and got their nose in front at the 1500m mark,” as reported in the article.  “They won in 6:10.070s. 0.59s ahead of Poland with Italians Filippo Mondelli and Luca Rambaldi third 1.26s behind.”

Bronze medals were won by the women’s eight and by Jamie Hunter and Tom Murray in the men’s pair.