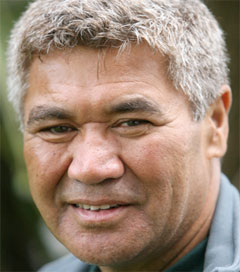 Actor Rawiri Paratene, 59, features in Mike Jonathan’s Troilus and Cressida: The Road to the Globe, which follows Paratene, director Rachel House and their 18-strong cast during the gruelling three month lead-up to London’s Shakespeare’s Globe show in 2012. Paratene’s Ngakau Toa troupe performed the play in te reo Maori as part of the Globe to Globe event, in which 37 countries performed 37 of Shakespeare’s plays in 37 languages. Paratene says: “After the show, the director at the Globe said our production had f—ed up Troilus and Cressida for the next 20 years, because who would want to go and see some namby-pamby Rada graduates take it on after they’ve seen our version in te reo? That, for me, was the highest compliment possible.” Paratene performs in King Lear, alongside American Joseph Marcell, at the Globe in May.