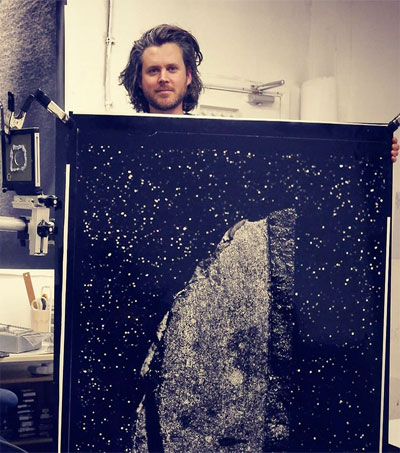 Fine art photographer Casey Moore travels the world documenting meteorites using his large-format Sinar camera, with much of his work centring around reconnecting with New Zealand, his country of origin.

In the course of his research, London-based Moore discovered that nine meteorites had been found in the country. The National History Museum has seven of them in its collection.

To complete his collection of photographs, Moore flew over to New Zealand at the start of 2014 to shoot the remaining two meteorites. One – which fell to Earth in 1908 – was housed at the Whanganui Regional Museum, while the other landed into the living room of Phil and Brenda Archer of Ellerslie in Auckland in 2004 and is now stored in the Auckland Museum.

The Ellerslie meteorite was “the final piece of the jigsaw”. He speaks of this last rock fondly. “It’s so recent and it’s still intact [many meteorites were broken up and exhibited around the world]. You can see its abrasions from coming through the atmosphere, the shape that it melted into as it arrived. It has a particular texture that means you wouldn’t mistake it for any other rock.”

Moore doesn’t yet have an exhibition planned for the meteorite pictures, but is showing some of his older work, with one show – of shots of botanical specimens reflecting “universal symmetry” – planned for New Zealand in May.