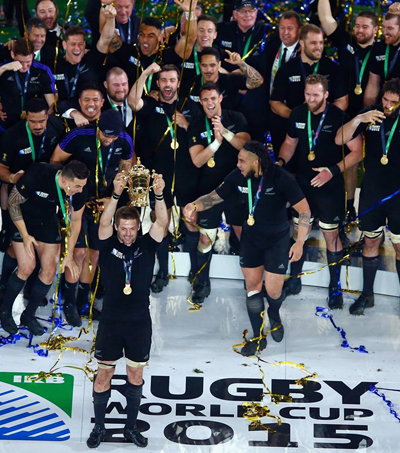 “The New Zealand All Blacks made it clear this weekend that there isn’t a rugby team in the world that compares with them”, writes Joshua Robinson for the Wall Street Journal.

With their winning percentage above 78% (dating back to 1903) and their back-to-back Rugby World Cup wins, the New Zealand All Blacks are one of the most successful teams in sports history.

When asked if the current team was the greatest All Blacks of all time, coach Steve Hansen said “that will be for other people to say”.

“I think Richie McCaw is the greatest All Black we have ever had and Dan [Carter] is a close second,” said the coach.

During Richie McCaw’s captaincy the New Zealand team has won 97 of its 110 Test matches.

“We drew a line under 2011 and built a team that could come here with a lot of experience,” said McCaw, referring to their Rugby World Cup win in 2011.

Until now, the late 1980s side that was captained by Wayne “Buck” Shelford had been considered the cream of the World Cup era with six match victories by an average of 41 points, according to the article.

And even before that “New Zealand produced plenty of untouchable teams”.

In their landmark tour of Europe in 1924-25 the team became known as The Invincibles, when they won all 32 matches they played and scored a total of 838 points.

“They said it couldn’t be done.”

Veteran players like Carter or McCaw are set to retire, but that doesn’t mean the team’s dominant time is over.

“The pleasing thing is, we’ve got a massive group of players who have played between 20 and 40 test matches who are in great shape to carry on,” said Hansen.

“There’s a lot of good men that have gone before,” said McCaw.

“Your job is just to enhance and add something to that legacy.”