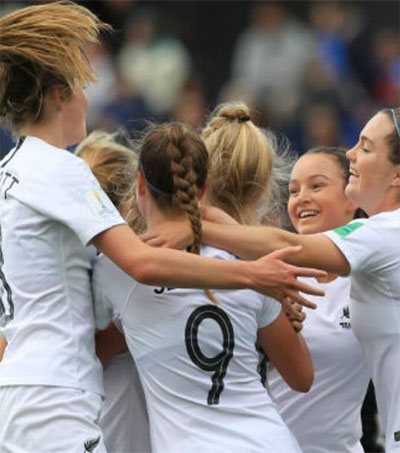 New Zealand has beaten Canada 2-1 to bring home bronze at the FIFA U-17 Women’s World Cup in Montevideo, Uruguay.

The Canadian women found themselves down just 15 seconds after the opening kickoff with New Zealand’s Grace Wisnewski erasing the tournament record of 22 seconds for fastest goal, set by Nigeria’s Soo Adekwagh in 2008.

Wisnewski, 16, also scored in the 13th minute as the Canadians dug themselves a deep hole.

“It was an amazing start,” coach Leon Birnie told Stuff. “To start like that gave the girls real confidence and set the tone for the first half. I thought in the first half and deserved of our 2-0 lead but as we moved into the second half we had to show some typical Kiwi attributes around hanging in there, fighting and showing determination and battle through.”

New Zealand finished a record high, having previously never made it past the U-17 group phase. In five previous U-17 tournaments, it had never finished higher than 12th.

“We had an amazing campaign and I think the bronze is the icing on the cake and completes what has been an outstanding tournament for these girls,” Birnie told Stuff.

“To get a bronze is so special. It’s such a humbling moment. The tournament could not have panned out any better for us. But in saying that there’s been a lot of hard work behind the scenes that has gone on for two years leading up to this point, so it’s great to see that come to fruition.”

Spain beat Mexico in the final 2-1 to claim the gold medal.