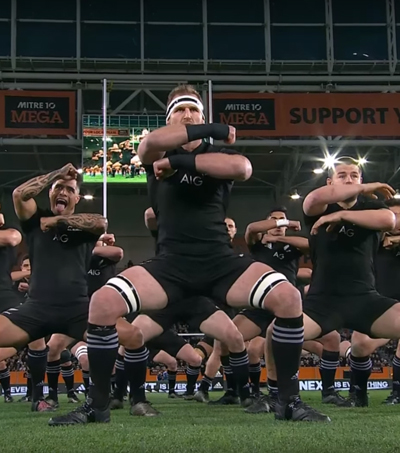 Why New Zealand “Still Rules the High Seas of Rugby”

“The flag which flutters highest on the masthead of world rugby is still all black in colour. It does not have a skull-and-crossbones on it, but when it hoves into view everyone knows its meaning. For an opponent, this particular ‘Jolly Roger’ is a threat to life and limb,” writes Nicholas Bishop in an article for The Roar.

“While the reasons behind New Zealand’s extraordinary run of success since 2004 have been the topic of many books and studies, on the field it boils down to a single core reality – the breadth and excellence of individual skill-sets, and their consistent application under pressure,” writes Bishop.

“Footballing ability up front is what distinguishes New Zealand from everyone else.”

“The demand for high-tempo, high-quality footballing skills in the tight five provided a sharp wake-up call for France on their recent tour of the Shaky Isles,” writes Bishop.

“Jacques Brunel was even forced to recast a player who plays all his club football at number 7 (Bernard le Roux) as an emergency second row during the June series. The French lineout throw promptly collapsed and undermined the effort of the team everywhere else.”

Kiwis “demand more, in terms of skills, from every position on the field. Nowhere is this more evident than in their tight forwards, and in the shifting selection tendencies at number eight.”

“As a group, Kiwi tight forwards still handle and pass better than any of their counterparts.”

In New Zealand “the No.8 increasingly enjoys a creative play-making role. In one form or another, all of Gareth Evans (for the Hurricanes), Liam Messam (Chiefs), Luke Whitelock (Highlanders) and Kieran Read (Crusaders) can use the ball and unlock spaces for others to exploit.”

“Read is the perfect example of real value added to the core requirements of his position. His power in contact is adequate, rather than earth-shattering, but his point of difference lies in his creative ability with the ball in hand, which is unmatched.

“While the Northern Hemisphere can rightly claim to have caught up, and even surpassed New Zealand in areas like kicking and defence, the Tortuga of superior skill-sets and more refined positional demands still holds sway,” writes Bishop.

“Until that final citadel can be successfully besieged, those All Black buccaneers will continue to rule the high seas.”

Tags: All Blacks  Roar (the)