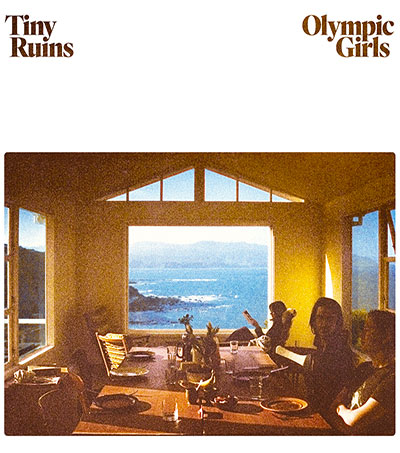 “Though extended spans between albums from a beloved musician can be worrisome or even infuriating for fans, it can be a sign of necessary inspiration, too. Such is the case for Fullbrook, who has released records under the name Tiny Ruins since 2010,” Farrell writes.

“Four years ago, after the exhaustive touring cycle behind 2014’s already heavy-hearted Brightly Painted One, Fullbrook felt depleted and numb. ‘I remember just being like, “I’m empty. I’m completely empty,”’ she says. ‘It took a few months to find stuff that I was excited about again.’ After foraging for a new creative fix, Fullbrook seems to have found something special: Olympic Girls, the third Tiny Ruins album, embraces lyrical nuance and compositional evolution in compelling fashion.

“From the circus-like melodies of ‘One Million Flowers’ to the fractured luminosity of ‘Holograms’, these 11 tracks take curious turns down hidden paths, especially relative to the more straightforward, muted folk of Tiny Ruins’ past. Fullbrook’s voice is silvery, with a controlled grain, the texture imparting a sense of trust as she guides us through muddied trails of melancholy and bright grottos of psychedelia.

“Fullbrook consistently explores the definition of liberty through varied perspectives here. ‘Bounty’ reverses the previous liberty/imprisonment dichotomy, as a protagonist awaits inevitable capture. During closer ‘Cold Enough to Climb’, Fullbrook sings in a languid drawl about a ‘smoker pink’ sky and a seven-hour car ride. In her mind, she settles inside the crevices of another’s arms – for a moment, at least, free from pain.

“Set to music that looks toward new horizons, Olympic Girls is a gentle study into freedom’s precariousness. The quest can be exhausting and frustrating, but, here, Tiny Ruins relish its brief embrace.”

Fullbrook was born in Bristol, UK and raised in Auckland.