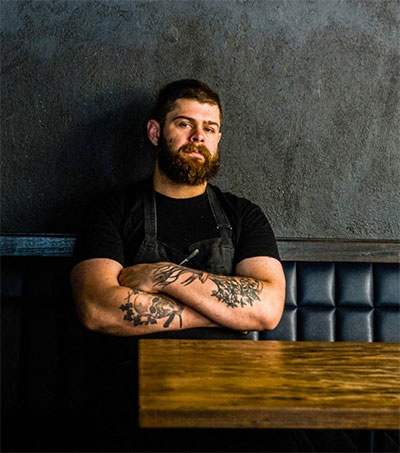 Snadden-Wilson grew up in New Zealand, learning to forage and hunt from a young age. He spent time in the kitchen under chef-owner Dave Verheul at the acclaimed, now-closed Town Mouse and as sous chef at equally celebrated city wine bar Embla before taking on the head chef role at Ramblr, which ran its final service in March this year, making way for a 10-seat pizza-by-the-slice bar from the same crew.

The new Etta menu echoes the old in many ways, modern Australian with a European slant, but overall it’s tighter and more conducive to sharing. Only two dishes hero meat – more generous are the vegetarian options.

“We’re just trying to create a nice, more accessible sort of vibe,” Snadden-Wilson says. “So you can come in and have a plate of pasta and a snack, or you can have a whole stack of food. As opposed to, you know, telling people how to eat.”

“Everything goes over the barbeque at some point,” he says. “I spent the first couple of years at Embla working the fire section, and it just feels like a very intuitive way of cooking. It’s cooking that I feel more comfortable doing.”