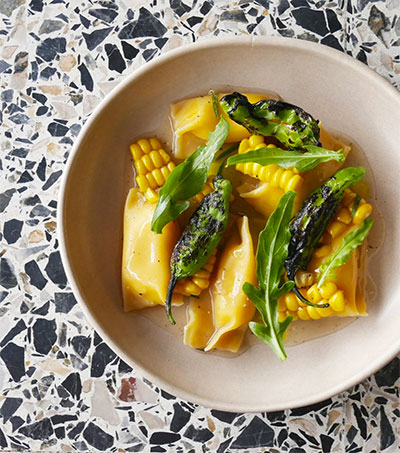 “It’s often said that Australia doesn’t really have its own national cuisine – that as a young country, its food culture is best understood as a mosaic of traditions drawn from Asia, the Mediterranean, the Middle East and Europe, blended together and adapted to suit Australian produce and palates,” Nadia Bailey writes for Business Traveler. “Lately, it seems this is changing. Take Etta, for example.”

“‘For me, it comes down to flavour,’ McMillan explains.” “‘At Etta, we want to give people something that they’ve never had before, but it’s really driven by flavour.’

“What he means by this is that the food isn’t designed to be challenging; it has none of the conceptual pomp you’d find at somewhere like Attica [owned by fellow New Zealander, Ben Shewry].

“Instead, Etta aims to please. With a menu reflecting the ‘melting pot of cultures’ that make up the local neighbourhood, Greek, Italian, Middle Eastern, Asian and Indigenous Australian influences all find their way into the bright, produce-driven fare.

“McMillan deploys native Australian ingredients with flair, using them as unexpected accents to more familiar flavours. Wattleseed, a spice prized for its flavour profile that sits somewhere between coffee, chocolate and hazelnut, is made into a dukkah and served atop a dish of heirloom carrots and salted ricotta, or used as a spice rub in curing meat. Blue-grey leaves of saltbush are fried to a crisp and plated with golden roast potatoes or a tangle of green beans with sauce gribiche. Its appeal, says McMillan, is in its texture: ‘I’ll use saltbush if I want to add a layer of salt and crunch to something.’”