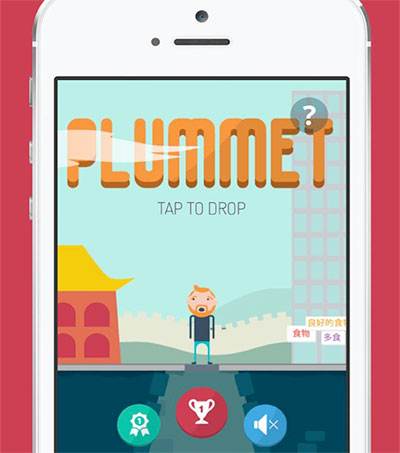 Seven years after New Zealander Mark Major, 28, fell down a 9m-deep hole in Beijing and broke his back, he has turned his near-death experience into a tongue-in-cheek mobile game called, Plummet Free Fall, which has this month become the No 1 free game in Russia, Ukraine and Belarus.

Major explained his accident: “I was interning in Beijing [in 2007]. One night, I was walking to my local 7-Eleven and all of a sudden I found myself free falling.

“About 7 metres down I crashed through a plank, which slowed me down. I believe to this day that the plank saved my life.”

He was eventually hoisted out by firefighters and passersby, and taken to hospital where scans confirmed a broken back. He was not paralysed, though he still suffers pain and upper body mobility has been impaired.

Rather than wallow in pity Major decided he would profit from his accident, and through his start-up company Broken Back Games produced a game.

In making the game, Major wanted to inspire others to not only overcome the twists of fate but also to realise their own entrepreneurial ambitions.

“It is not hard in today’s world to build something like this,” Major said. “All you need is inspiration, vision and tenacity.”

Major, an avid gamer, modelled his game on the successes of titles such as Flappy Bird and Temple Run, with their sole objective of achieving high scores. Plummet lets users assume a cartoon version of Mark as he “plummets” down an endless shaft, tilting the phone left and right to avoid obstacles and continue falling.