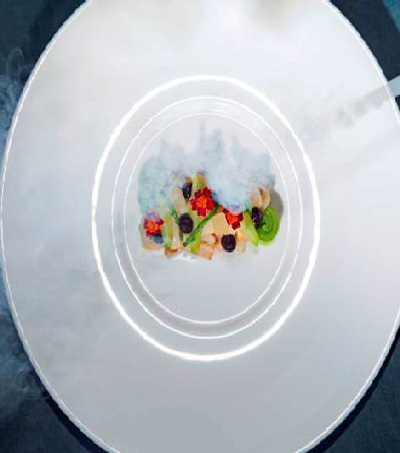 Amelia Lester writes for The New Yorker restaurant column this week about Australasian cuisine, with a focus on the Musket Room, the highly acclaimed restaurant of New Zealander Matt Lambert.

She writes of the growing availability of the flat white, and the origins of Australian and New Zealand regional cuisine, which is created by “drawing on the countries’ colonial past and overlaying it with the southern European and Asian influences of postwar migration.”

“The greatest misconception…is that Vegemite, a spread made from leftover brewer’s yeast, tastes bad. It doesn’t; you’re just doing it wrong.”

The six-course tasting menu at The Musket Room is a subtle homage to New Zealand.

“Lambert’s art is in showing, not telling, as in a dish of cold scallops hidden under a silver cloche, to capture the smell of the manuka wood chips with which they were smoked.

“It’s a comforting aroma for those who know the tree, which is native to New Zealand, and, for those who don’t, a briefly transporting experience.

The scallops are from Maine, but the venison, a standout entrée, is from New Zealand. It’s pleasingly sinewy and chewy, and tastes like the deer got to really roam some vast verdant fields.”

“On a recent evening, the bar was packed by eight o’ clock, and a cluster of young women in wrap dresses kept ordering boulevardiers.”

Original article by Amelia Lester in Tables for Two, The New Yorker, September 15, 2014.