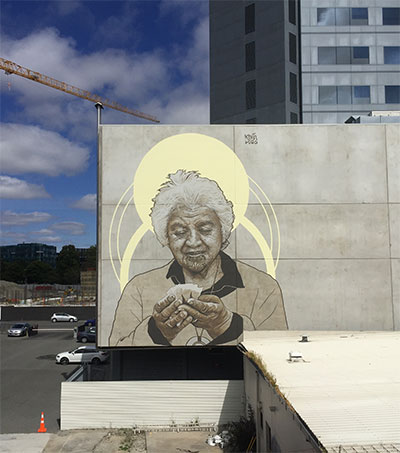 Canadian artist Kevin Ledo is known for his impressive murals of portraits, and this time it’s a portrait of Whero O Te Rangi Bailey, a Maori elder from Parihaka in Taranaki, originally photographed by Aucklander Stuart Robertson, and which features on the Crowne Plaza Hotel in Christchurch.

Ledo met with Robertson in Christchurch to discuss how the former might use one of Robertson’s photos from his Peace in 10,000 Hands project.

“This great project is where Stu photographs a white rose, an ancient symbol of peace, in the hands of 10,000 people from every country on the planet,” Ledo writes for UK-based blog StreetArtNews.

“After some discussion, we agreed that it would be a great idea for me to reinterpret one of his photos into a mural on [the hotel].

“Soon after starting the mural, the daughter of the woman I was painting, Maia, reached out to me with the kindest words and appreciation. She spoke very highly of her mother and her impact on the community. Whero Bailey is no longer with us, but her daughter said she would have been humbled by this dedication to her. She said the image is being shared around the family and around the rohe.”

Robertson is the first New Zealand photographer to be featured and supported by Leica, the world’s oldest and most respected camera brand.