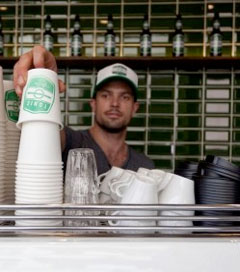 London’s Coffeesmiths Collective, run by New Zealanders Tim Ridley and Chris McKie is, together with London banker and investor Stefan Allesch-Taylor, about to open its fifth specialist cafe in the centre of the capital  – Tonic Coffee Bar, a “contemporary take on an Italian Espresso Bar”.

Currently, the Collective runs amongst others, the Department of Coffee and Social Affairs, and Soho’s Speakeasy Espresso & Brew Bar near Carnaby Street.

“One of Ridley’s first impressions of London was that, unlike in New Zealand and Australia, locals didn’t socialise in cafes,” Sheriden Rhodes and Angie Kelly write for the Brisbane Times in an article about Antipodean-owned coffee shops in London. “Ridley and his team hope to change that. Based in a renovated ironmonger’s building, the Department of Coffee and Social Affairs aims to be a coffee-focused social hub for local residents and office workers.”

“[Allpress Espresso Bar in Shoreditch] started by New Zealander Michael Allpress, expanded to Sydney in 1999 with the help of Sydneysider Tony Papas before exporting the concept to Britain three years ago. Its roastery with an adjoining cafe sells its coffee to other independent cafes.”

The writers also visit the New Zealand- and Australian-owned Kaffeine, which “is where anyone who knows anything about coffee will direct you to in London.” “Dimly lit, with exposed floorboards and red-brick interior, this independent cafe sells an extensive selection of house-made cakes, delicious banana bread and excellent Square Mile coffee, which explains the long queues.”