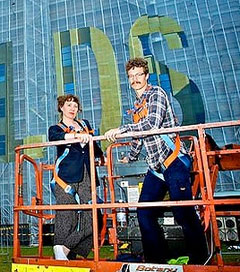 It XXXXX XX Up at Sydney’s MCA

Sydney’s latest public artwork created by Dunedin-born artist Mike Hewson, 28, is certainly hard to ignore, covering more than 2000 square metres and spelled out in 14 metre-high upper-case letters on the temporary scaffolding enshrouding the front of the Museum of Contemporary Art is the tantalising phrase “IT HOLDS UP”. The words have slowly been revealed over the past month by Hewson, working from a cherry picker on the 25 metre facade, giving plenty of time for passers-by to speculate on their intent.

The work can be seen from all around Circular Quay and the Opera House precinct but there is one “magic” viewing spot from which it lines up perfectly. “It’s a particular seat slightly off centre and up against the water,” Hewson says. “You stand there and the kerning of the letters is perfect, as if someone has just cut it through perfectly. From every other angle it’s distorted.”

Over 4 and 5 August, the completed artwork will be floodlit, adding an extra dimension to it, Hewson says. And then shortly after that it will begin to disappear, as the refurbishment work on the building is completed. “It might be up in its entirety for only a week,” he says. “It’s almost like a really slow stop-motion animation.”