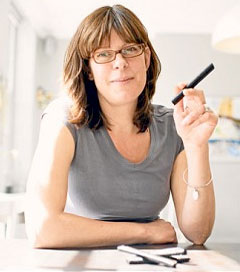 One chef who is especially enamoured with the “rehabilitation” of liquorice and its “earthy, powerful flavour” is New Zealander Anna Hansen, chef proprietor of the Modern Pantry in London’s Clerkenwell. Like many antipodeans, Hansen grew up with liquorice – soft eating liquorice is a bestseller over there. But Hansen also has liquorice in her blood. Her mother is Danish, and the Scandinavians are mad about the plant. “When my aunties would come and visit from Denmark they would bring over suitcases laden with cheeses and salamis and packets of liquorice,” Hansen explains. “There was salted and unsalted, partially salted, the full range.” Salted? I’ve tried salmiak, the Nordic liquorice sweets (I use the word loosely) flavoured with ammonium chloride, and they are gum-numbingly nasty. Surprisingly successful flavour combinations are Hansen’s talent. She arrived in Britain in 1992 and worked as a dishwasher for Fergus Henderson in his then restaurant the French House Dining Room in Soho, before moving to cook at fellow New Zealander Peter Gordon’s Sugar Club restaurant. Gordon is the master of fusion, and Hansen learnt to use a huge palette of ingredients from around the world, such as amchur (tangy green mango powder), fragrant Indonesian pandan leaves and hijiki, a Japanese seaweed. Hansen is the first to admit that these recherché ingredients can be hard to find, and the foreign labelling impenetrable for most of us. With this in mind, she has put together a collection of some of her favourite flavourings to sell in the deli attached to the restaurant, including the liquorice juice sticks and a potent liquorice paste which, she says, is perfect with chocolate. Will her new baby be growing up with liquorice like she did? “Oh yes,” Hansen says. “That will be a flavour it gets used to very soon.” Hansen was given an MBE in the 2012 honours list for her services to the restaurant industry.