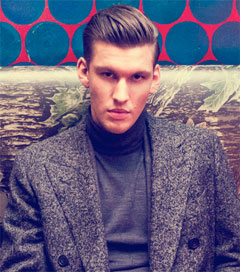 Moon’s Got High-Concept Britpop Down

Wellington-born Willy Moon, 24, who recently played New York’s Gramercy Theatre made the New York Magazine’s Jody Rosen “suspicious at first.” “When a press release hails a weedy young London-based New Zealander as ‘Bo Diddley remixed by Swizz Beatz,’ the wise critic arches a skeptical eyebrow,” Rosen said. “When that same New Zealander appears in publicity photos looking like a kind of mod David Niven, with lacquered hair and immaculate three-piece suits, the warning sirens begin to wail. It was all too neatly conceptual, too fashion-victim-y, too arch, too British. I could smell the fish-and-chip-paper stink of hyperbolic UK press notices wafting across the Atlantic. Then I heard the record and realized I was right – and wrong. Moon doesn’t sound anything like Bo Diddley; he sounds even less like Swizz Beatz. But his debut album, Here’s Willy Moon, is high-concept Britpop that works. The formula is ingeniously simple. Moon’s songs mix the ferocity and starkness of early rock and roll with the blunt, pummelling beats of early hip-hop. He looks like a male model, but he doesn’t sing like one; I like the vibe in his videos, the way his Blue Steel pout curls into a sneer when he pushes out his vocals. The songs – about girls and the awesomeness of Willy Moon, mostly – are sharp and, even better, short; they don’t belabour the point. Moon has got brevity down; he has some wit too. As for soul: That’s a work-in-progress, but who knows?” Moon performs at the Café de la Danse in Paris on 25 June ahead of the Parc de Valmy festival in Argelès-sur-Mer on 7 July.