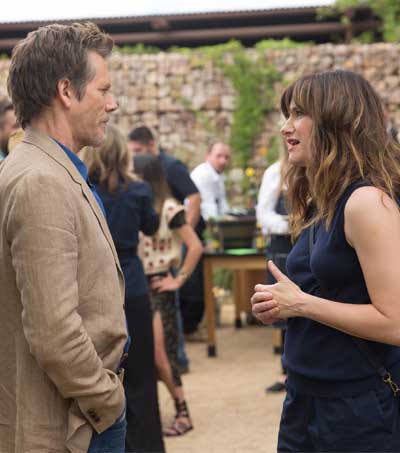 One of the most compelling, influential, and controversial cult novels of the last 20 years, New Zealand transplant Chris Kraus’s I Love Dick, is coming soon to Amazon Prime in a TV adaptation spearheaded by Emmy Award-winning auteur Jill Soloway, creator of Transparent.

In a recent New York Magazine article, James McBride follows the TV shoot—with a story setting that’s moved from primarily Southern California and upstate New York to Marfa, Texas, the population 2,000 art outpost that’s a three-hour drive southeast of El Paso. “I Love Dick might be the least obvious, and most difficult, candidate for adaptation since Game of Thrones,” writes McBride of the show, which stars Kathryn Hahn (best-known recently for her role as Rabbi Raquel on Transparent) as a failed filmmaker named Chris; Griffin Dunne as her husband, Sylvère, a cultural critic and Holocaust scholar; and Kevin Bacon as the rangy and charismatic academic named Dick. “Sprawling, cerebral, and uncomfortably intimate,” Soloway’s TV adaptation has “the potential to be as groundbreaking in its examination of gender politics as [Transparent].”

An experimental, epistolary novel about a married, failed independent filmmaker’s obsession with a cultural critic, I Love Dick ultimately is a powerful feminist statement about the discovery of one’s artistic voice. Kraus’s artistic daring was shaped in part by her early experience living at the edge of the world. Kraus’s parents immigrated from the U.S. to New Zealand toward the end of the 1960s. She studied literature and political science at Victoria University in Wellington while also becoming a full-time newspaper journalist and TV critic by the time she was just 18. Kraus later returned to New Zealand in the early 1990s to make Gravity and Grace, a film funded by Creative New Zealand.

Since its publication in 1997 by Semiotext(e), the small but influential publishers of cutting-edge theory and transgressive fiction, I Love Dick has gained a remarkable reputation, with The Guardian heralding it “the most important book about men and women written in the last century.” For her part, the enigmatic Kraus was delighted that Soloway was interested in tackling a book many thought unfilmable. “Jill has a great sense of comedy,” Kraus told New York Magazine. “That’s the first affinity. And, of course, the feminism of the book is in synch with her and Andrea’s work with Topple [the production company Soloway runs with Andrea Sperling, that takes its name from ‘topple the patriarchy.’].”

I Love Dick premiers on Amazon Prime on August 19.