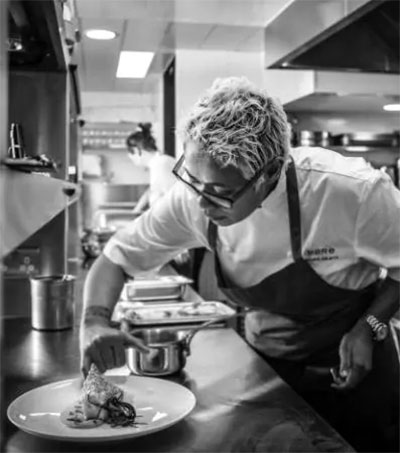 Monica Galetti Cooking as She Pleases in Fitzrovia

The spotlight is once again on Masterchef judge New Zealander Monica Galetti as she opens her first restaurant Mere in Fitzrovia, London. The Telegraph reviews.

According to the newspaper’s Hilary Armstrong, Galetti’s Mere is “a high profile launch at the ‘wrong’ end of Charlotte Street.”

“Though given that the ‘right’ end these days is a cluster of undistinguished chains, Monica and David Galetti’s spot a few doors down from Bubbledogs feels felicitous,” Armstrong writes.

“It’s not hard to imagine the Galettis’ former Gavroche customers tootling over from Mayfair to dine at Mere. For while it may ostensibly be modern, its roots are deep in the old school.

“Her classical background and international heritage combined with a healthy resistance to trends free Galetti to cook as she pleases. One minute conservative, the next audacious, she turns a New Zealand pork ‘boil up’ with ‘doughboys’ into a genteel broth with wobbly nuggets of ham hock and just one small dumpling, pale green and perfectly spherical.”