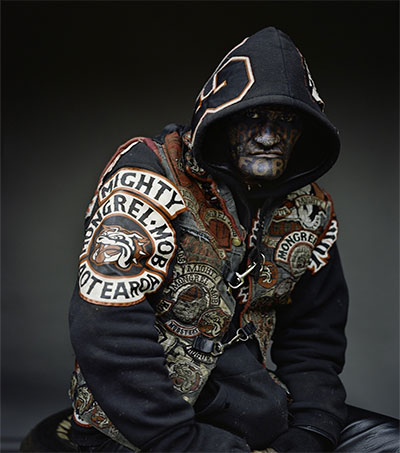 “Arresting. Exquisite. Gripping. Chilling. Disgraceful. Unacceptable. These are all words people have used to describe portraits made by Jono Rotman. Created over the last decade, his project Mongrelism presents an intimate look at members of the Mongrel Mob – New Zealand’s largest, most notorious gang,” Allie Haeusslein writes in a feature for the British Journal of Photography.

“Though he is looking at a subculture as an outsider – a domain regularly mined by photojournalists – Rotman eschews a traditional documentarian approach to his subject matter. In so doing, the project’s scope extends beyond the Mob itself to touch upon issues related to New Zealand’s charged colonial past and self-professed biculturalism, the politics and ethics of portraiture, and the intersections of seemingly disparate human experience,” Haeusslein writes.

“The New Zealand-born photographer explains that since childhood, ‘I always felt certain violent and uneasy forces within my country’.

“Through contacts suggested by a gang liaison within the police force, Rotman initially planned to photograph members of various New Zealand gangs, estimates of which indicate there are 25 affiliations on the small islands nation, with a total membership that outnumbers the country’s own army.

“‘It is a fertile subject,’ he explains. ‘But for me, the Mongrel Mob ultimately felt like they have the most unique identity, the most searing percolation of the forces at play.’

“The unprecedented trust and access given to Rotman by this secretive group is echoed in his sense of responsibility to his subjects and their communities, a notable deviation from troubling examples of exploiting people seen as ‘other’ throughout photography’s history. ‘Because of their trust and what was being gifted to me in their engagement, I have a responsibility to them that the work is not something that I just take away from them. The project’s relationship to them is really important to both the spirit and power of the work.’

“In 2014, eight of Rotman’s Mongrel Mob portraits were shown at the Gow Langsford Gallery in Auckland. The exhibition provoked heated public debate and media criticism, especially given that one of the included subjects was then on trial for murder with the victim’s father pleading to the gallery and artist to remove the photograph. A spokesperson from an anti-crime advocacy group deplored the work, asserting, ‘I think it is glorifying gang culture and completely offensive to their victims, and the members of the public and society who live a socially acceptable and tolerated life.’

“Mongrelism can now reach a greater audience as a book, made possible through support from the Book Award of the Grand Prix Images Vevey 2017/18 and published by Here Press. Rotman’s edit and sequencing aims to ‘illustrate the depth and complexity of their world, but, at the same time, give nothing away’.”