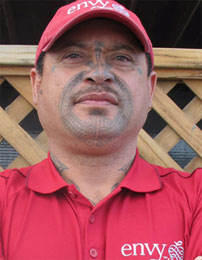 Another Kind of Edge

President of the Mongrel Mob’s Napier chapter Rex Timu is one of a number of gang leaders rejecting violence and urging members to embrace mainstream values. Speaking over a hot chocolate in the cafeteria at the apple exporting company where he works, Timu says: “We want to stop the criminality and look after our families.” Timu says he advises would-be recruits to “go away and get an education”. “There’s an acknowledgement that things have to change,” national coordinator of the Mongrel Mob’s once-feared Notorious chapter Edge Te Whaiti says. “We all want the best for our kids.” Some government agencies are also working with gang leaders to combat social problems. The first Hells Angels chapter outside California was founded in Auckland in 1961.