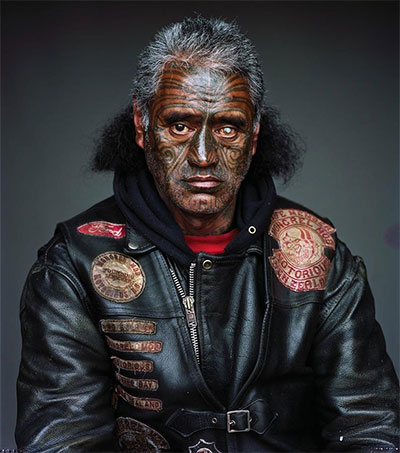 Jono Rotman, who is a Wellington born photographer now living in New York, cut his teeth capturing New Zealand’s prisons and psychiatric wards, before he took on gang life in 2007, with a series of Mongrel Mob portraits he took over eight years.

Media access to the Mob is rare, which is why these photos by Rotman are kind of a big deal, according to Vice. The magazine asked him how he convinced hardened gang members to sit for large format photography, and what he learned along the way.

“Initially I called the gang liaison officer at the New Zealand police and got a list of numbers of people who communicate between the gangs and the police,” Rotman said. “When I started it was to cover the gamut of New Zealand’s gangs, but ultimately I focused on the Mongrel Mob.

“I explained that I wasn’t trying to ‘tell their story,’ expose them … Instead I told them I wanted to take martial portraits. And you know, regardless of where the Mob are viewed in the social hierarchy, these men have committed to a creed and fought battles, sometimes to the death. Basically the more they thought it was honest, the more they understood I wanted to produce something more complex than a cultural postcard. Then once there was go-ahead from the top, the guys down the bottom were happy to cooperate. These guys are hierarchical.

“[Working with the Mongrel Mob] peeled the lid off the New Zealand I knew – some of these guys are from serious poverty and from some fucking difficult environments. That’s helped a lot in understanding my country. You don’t tend to join a gang because you had access to good schools and all that sort of stuff.

“It’s humbling to meet people who’ve had an utterly different upbringing to my own, and to be welcomed. It’s also an insight into the forces that have made New Zealand. These guys have played a very important role.”

In 2013, Rotman was awarded the Marti Friedlander Award for Photography.