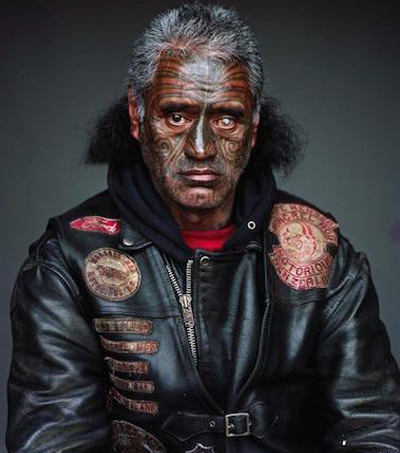 Photographer Jono Rotman’s most recent series “Mongrel Mob Portraits” – “depicts a unique vein in the tissue of New Zealand society, bringing up questions about national narrative and the perspectives of its inhabitants,” as reported in Some/ThingsMagazine.

“His subjects sit for the camera without artifice, allowing us a glimpse of people behind the collective identity of one of New Zealand’s most prominent and notorious gangs.”

In an interview with Some/ThingsMagazine he spoke about the series, his Auckland exhibition and what he aims to depict with his photographs.

“I’m interested in universal themes of the human condition…. The mob represented to me a particularly focused extreme of what manifests when people are pushed,” said Rotman when asked about what attracted him to the mongrel mob as a subject matter.

“What I am most concerned with expressing or giving people the opportunity to commune with, is the depth of human experience behind the mask. People in gangs often come from environments where there’s difficulty, perhaps violence and often the prison experience. I’m interested in exploring how these sorts of experiences might be revealed in the lineage and topography of the person’s face,” said the photographer.

When asked about accusations that he was ‘glorifying’ the gang, he said: “I think they are representative of an extraordinarily important part of the New Zealand narrative…. I was simply taking a photograph of something that exists.”

His first exhibition at the Gow Langsford Gallery in Auckland was pretty contentious, as reported in the article.

“I think I would’ve been a fool not to have entered into the project without an understanding of the charged aspects of the subject… In a sense the mob are everyone’s favourite villain in the country… I believe they are a very vital representation of the complexity of New Zealand society,” said Rotman.

“I have met members of the mob who to me as human beings are more impressive than many lauded individuals. I feel I’ve met some really beautiful individuals amongst a group of often quite damaged and troubled folk and I feel very fortunate, and it’s had a big impact on me. It is what you do with your experience that is what ultimately defines you.”

“There is the rags to riches paradigm and as a society we are in thrall of people coming from no money and making a lot of money. I believe you can also apply that template to the development of character. If someone has come from an environment where there have been a large number of forces pushing them to be bad or have difficulty and yet they develop a wise, kind, and benevolent character in the face of that, I think this is no mean feat and ought to be lauded.”