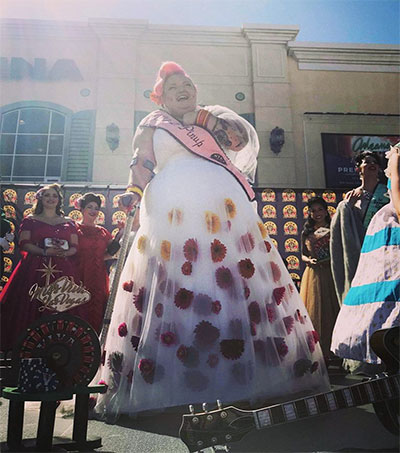 The event is said to be the largest and most respected Rockabilly festival in the world.

It recently celebrated its 20th anniversary and hosts a number of other shows to draw in the crowds; such as a car show, burlesque shows, six music stages, a fashion show and the Pin-Up contest.

Robertson, whose business is Fran Robertson: Decorator of People and Things, took to social media to thank her many supporters and fans:

“I had such an amazing day at the Viva Las Vegas car show, meeting people, handing out fans, taking photos and honestly – winning the contest was just the icing on the cake.”

She is not new to the scene, having been crowned the winner of Miss Pinup New Zealand in 2016.

In 2015, fellow New Zealander Ella Webster, known as Miss Victory Violet, won the Las Vegas competition and became the first from this country to do so.

The competition website said the contest was very much about finding a woman who exemplifies what it means to be a “great pin-up in today’s modern world”.

“We are looking for a pin-up who can carry herself in a crowd, but who shines within it. She must be positive, professional, kind and compassionate.

“This contest is not one that is based on popularity or cosmetic appeal, but one that includes inner beauty as well.’”