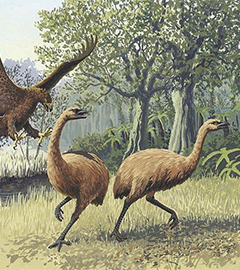 The dream of resuscitating dinosaur species – a la Jurassic Park – has been dealt a death blow in a new study examining the decay rate of DNA in the bones of the extinct Moa bird of New Zealand. In a paper published in biological research journal, the Proceedings of the Royal Society B, scientists measure the rate of decay in Moa bones, which disappeared from New Zealand following human migration, starting in the 13th Century.

Although there was variation in the decay rate, which will require further study, the team was able to estimate a half-life of 521 years for Moa DNA. A half-life refers to the length of time required before half the original DNA is left extant.

The study also shows that DNA in bone seems to decay at a rate 400 times slower than raw DNA placed in a solution. The group posit that bone, or even fragments of bone, trapped in the permafrost could yield viable DNA considerably older than the present DNA survival record of half a million years.

A million years, however, is several galaxies away from a 65 million-year-old dinosaur bone, meaning dinosaur DNA will remain the province of science fiction only. At least there’s still the movie and Michael Crichton books.