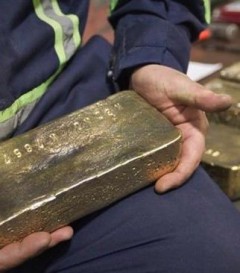 Michael Fischer Mines Gold on Top of the World

New Zealander Michael Fischer mines gold at the top of the world. He heads the Kumtor Operating Company in Kyrgyzstan, a nation of 5.5 million people located half way between Moscow and Beijing. Mining gold at 12,000 feet is hard work. In 2012, glacial ice flowed into the open cast mine causing production to plummet by 43 percent. The mine is at such high altitude that Fisher’s workers can work on site for only two weeks at a time, after which they need a week off to recuperate. But nature is the least of his worries, says Dmitry Solovyov of Reuters. Kyrgyzstan has had two revolutions on eight years. And now, nationalists want the goldmine, owned by Canada’s Centerra Gold, to be expropriated. The nationalist’s claim the mine was sold too cheaply to foreigners. As if that were not enough, a state commission has fined Centerra $457 million in environmental damages. But Fischer takes this uncertainty in his stride. He told Reuters he expects the mine’s output to recover to between 550,000 and 600,000 ounces this year. He added however, that he does not expect any recovery in the mine’s relations with some hostile politicians. ‘We’ve gone through two revolutions, the first democratic parliament was elected, and we’ve managed with several governments. We believe that we are part of the fabric in Kyrgyzstan, and we’ll still be here up to the mine’s closure in 2026,’ he added. Reuters said that Fisher, who arrived in 2009, has overseen work that has added enough reserves to extend the mine’s expected lifespan by over a decade. Fisher told Reuters that the company would appeal against the environmental fines. ‘We feel these claims are exaggerated or without merit,” he said. ‘The Kumtor project complies with Kyrgyz laws, and meets or exceeds Kyrgyz and international environmental, safety and health standards.’ Fisher does have some important political allies. Prime Minister Zhantoro Satybaldiyev says compromise is vital and banishing Centerra would dash hopes of winning more foreign investment. Kumtor, which means Sand Peak in the Turkic national tongue, accounts for 12 percent of Kyrgyzstan’s gross domestic product, and more than half of its total exports. In 2012, when output was cut, the entire nation went into recession. The 3,400 full-time and contract workers at Kumtor receive monthly wages of $2,000 — 10 times the national average. Prime Minister Satybaldiyev has pledged not to expropriate the mine.