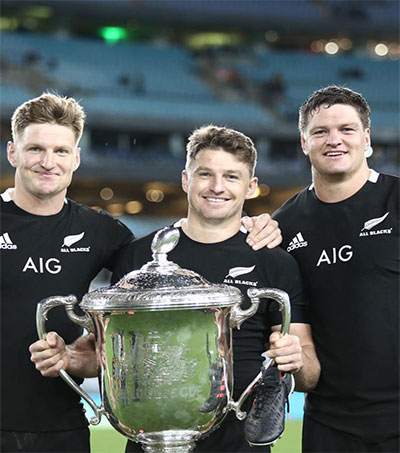 “New Zealand served up a Halloween nightmare for an inexperienced Wallabies side by romping to a record 43-5 victory in the [Sydney] Tri-Nations opener and claiming the Bledisloe Cup for an 18th successive year,” Reuters reports in a story published by The Guardian.

“All Blacks flyhalf Richie Mo’unga scored two brilliant individual tries in six first-half minutes and forwards Karl Tu’inukuafe and Dane Coles also crossed as the visitors raced to a 26-0 lead in just half an hour.

“The loss combined with a 16-16 draw and a 27-7 defeat in New Zealand earlier this month handed the All Blacks the Bledisloe Cup with [this] week’s fourth Test in Brisbane to spare.

“A rampaging run from centre Jordan Petaia set up Lolesio’s try and gave Australia the first score of the second half but the Wallabies continued to make too many mistakes to mount a serious comeback.

“‘I just don’t think we were accurate. We gave away the ball too easily and we didn’t kick smart,’ Australia captain Michael Hooper said.”