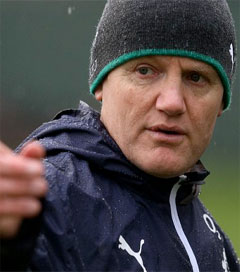 When 48-year-old New Zealander Joe Schmidt was being lined up to take charge of Leinster in 2010, he met the province’s captain Leo Cullen and Test fly-half Jonny Sexton at a Dublin hotel as part of the interview process. The verdict was that he talked a good game, but was perhaps too pleasant to make the grade, the Daily Mail reports.

He got the job and soon dispelled their notion of a “Mr Nice Guy” with his relentless demand for excellence. Under the ex-headteacher, Leinster went from being among the European elite to undisputed kingpins and he earned his international call-up last summer.

King told Sportsmail: “The way he gets his message across to the players is the most impressive thing. He breaks the game down and simplifies it and his attention to detail is amazing.