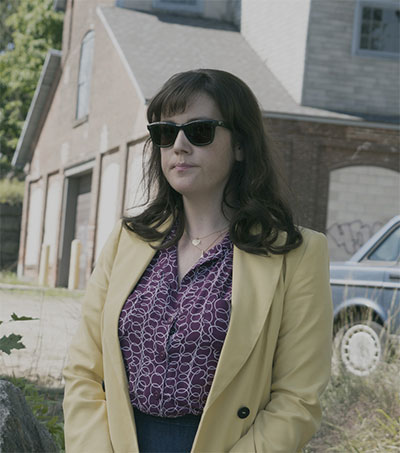 New Zealander Melanie Lynskey, one of the stars of Hulu’s Castle Rock, came of age in a cinematic era of dark quirk, but from Heavenly Creatures to Ever After to Sweet Home Alabama to Togetherness to, yes, even Two and a Half Men, she’s an actress for all seasons.

For the time being though, Lynskey is a resident of Maine’s most blighted fictional town, Castle Rock, where she plays Molly Strand, a clairvoyant real-estate agent with a pill habit.

Entertainment news site Vulture sat down with Lynskey and co-star Jane Levy (who plays cab driver Jackie Torrance) to talk about why they love each other, why Hollywood can be such a pain in the ass for women, and how TV is helping the industry raise its freak flag high.

“Do you want to know a funny piece of trivia?” Levy asks. “The first job I ever got, Melanie and I were going to work together. I was 20 years old and Melanie was going to play my mom, which is very Hollywood, because you would have to be 10 when you had me.”

“It’s hard to reach that place where you aren’t just as good as your last job,” Vulture writer Jordan Crucchiola says. “Like, your body of work can stand on its own and you can trust more work will come.”

Levy replies, “A 100 per cent, but I say no to some things sometimes.”

“I’ve been [acting] for 25 years,” she says. “That’s a depressing sentence. But yeah, I do think [access to better material is available]. I started out in the ‘90s and there was such a prescribed look for women. There were ingenues and character actresses and everybody was very concerned with what box you are going to fit into, and it really freaked me out and upset me. I was always like, ‘I’m a character actress, I guess. It sounds like the most interesting of all the options.’ And then people were like, ‘Well, don’t say that! Then you won’t get to play the lead!’ It was so bizarre, and now it does feel different.”