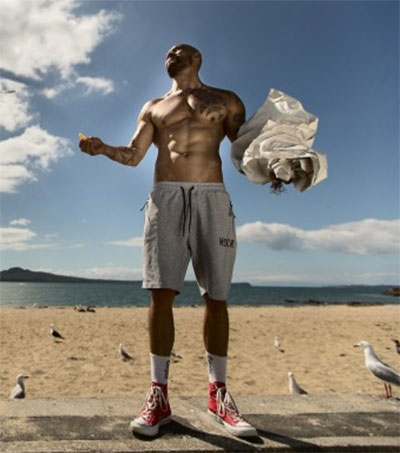 Kawerau chef Kelly Mcnaught was serving up food at a Gold Coast café when a customer asked if he could photograph him. “Then I got a Facebook message from an agent asking if I’d go to a movie casting,” recalls the 37-year-old.

“I sat down in this massive room with all these people, and The Rock walked in. I was like, ‘whoa’. I shook his hand and the first thing I said was ‘Do you know who you are?’. We had a bit of a laugh,” Mcnaught says.

Mcnaught says there had been a Southern Hemisphere casting call for a stand-in for Dwayne ‘The Rock’ Johnson, 44, for filming in Queensland of 2015 big-budget disaster film San Andreas.

Droves of applicants were whittled down to six including an international athlete and a world-level strongman, he says – “and me, some dude who was a chef who got called in”.

“The next day, they said, ‘Quit your job, you’re working with The Rock’. And that was how I ended up in the movie industry.”

At 1.88m Mcnaught, who is also a personal trainer, is not quite as tall as the Moana actor, who stands at a towering 1.96m.

But switching from a calisthenics exercise regime, which uses one’s own body weight to build muscle, to pumping serious iron, he bulked up from 90kg to 120kg at 7 per cent body fat to mirror Johnson’s frame.

“For breakfast I was eating 10 to 12 eggs. Then I’d just eat through the day. For dinner I’d have like two whole chickens.”

Mcnaught lost much of his bulk for his next role, he says – an acting part as a buccaneer in the upcoming Dead Men Tell No Tales, the fifth in the Pirates of the Caribbean blockbuster film series.